The 25 Best Dance Movies of All Time! 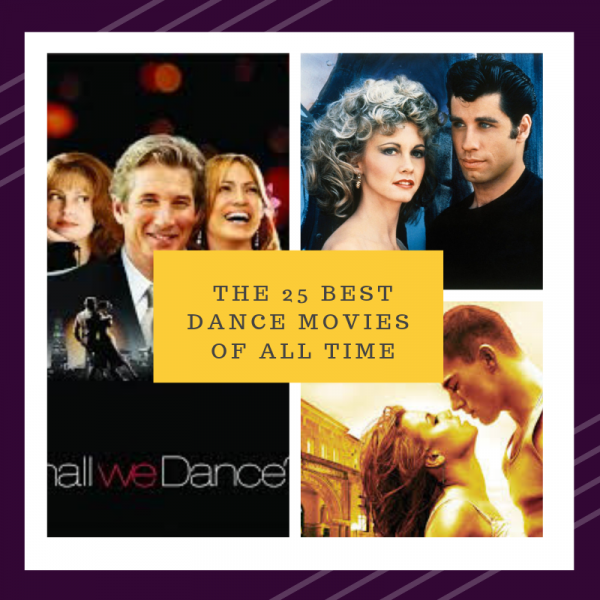 As a ballroom dancer, there are few things that bring me more joy than dance movies. You needn’t have grown up at the barre to love and appreciate films in which dance takes — for lack of a more on-the-nose expression — center stage. The need to dance is innate in every human being, and it cannot be denied (proof: Footloose). Movement and the self-expression it unleashes can be a great uniter, as seen in movies like Dirty Dancing, where it bridges socioeconomic and cultural divides. Just please don’t try the famous lift at home by yourself, call me for help!

It is an unquestionable fact that dance movies are the best kind of movies, because real life would be so much better if everyone broke out into spontaneous but highly choreographed dance routines at any given moment.

It’s always a perfect time to jazz-hand our way through the greatest dance movies out there. In order to determine which films would be eligible, though, I turned into a professional movie critic. Below, the definitive list of BEST DANCE MOVIES of all time, in no particular order. In a rainy and cold day grab a glass of wine and pick one to watch. Cannot wait to hear which is YOUR best dance movie of all time!

The be-all and end-all of dance movies, Dirty Dancing is the story of Frances “Baby” Houseman, who has the time of her life with Johnny Castle, the dance instructor at the resort where her family is spending the summer. The final dance sequence is downright iconic and will make you question why your own partner can’t lift you like that on command.  Now we know it is also my favorite dance movie. Best Bet You Didn’t Know These 25 Facts About Dirty Dancing!

This movie has everything: Peter Gallagher’s eyebrows, young Zoë Saldana, Olympic gold medalist Ilia Kulik, and an overly sexual finale number set to Michael Jackson and Jamiroquai. Come for the fantastic ballet dancing, stay for the inspirational message that you should always dance with your heart even when your turnout is bad. Margot Fonteyn didn’t have great feet! Definitely on the top of the list of best dance movies ever!

Opinions vary as to whether or not this movie is actually scary, but this list isn’t about screaming, it’s about dancing—and Black Swan has plenty of dancing. Natalie Portman plays Nina, a young woman desperate to land the lead role in her ballet company’s production of Swan Lake. Throw in an overbearing but hot director, competition in the form of Mila Kunis, and a psychotic mom living vicariously through her daughter, and you’ve got a big ol’ nightmare ballet stew.

Step Up is ostensibly the gritty, semi-ridiculous tale of a young man from the wrong side of the tracks helping a prim ballet dancer add some hip-hop moves to her big audition routine, but it’s really the story of, *SNIFFS*, how Channing Tatum and Jenna Dewan fell in love. Four sequels followed, but this one is, without question, the best.

Baz Luhrmann’s debut film is over-the-top, but in the best way. Scott Hastings partners up with Fran, who’s not really his type in either the romance or dance departments and has no last name. Their worlds collide as the prestigious Pan-Pacific Grand Prix Dancing Championship looms, but all Scott wants to do is bust out his own moves. Fran goes through a seamless transformation, Scott’s hair takes on a life of its own, and a cover of “Time After Time” serves as their love song. There’s also someone called Tina Sparkle, who you know is up to no good.

Alex Owens is a welder by day and burlesque dancer by night who dreams of becoming a professional ballerina. Who hasn’t been there? Also of note is the soundtrack, which features such classics as “Maniac” and “Flashdance…What a Feeling.” The ’80s were truly special.

A former professional dancer volunteers to teach dance in the New York public school system and, while his background first clashes with his students’ tastes, together they create a completely new style of dance. Based on the story of ballroom dancer, Pierre Dulane. Not only the best dance movie ever but also the best tango scene of all time!

8. Girls Just want to have fun

Before she was Carrie Bradshaw, Sarah Jessica Parker was Janey Glenn, a high school student who dreams of auditioning for her favorite show Dance TV. The movie also stars a young Helen Hunt and a young Shannen Doherty, and features Robin Antin, otherwise known as the woman who founded the Pussycat Dolls.

The 1984 original, not the 2011 remake, because what is Footloose without Kevin Bacon? One of the greatest dancing stories of all time is about a town where dancing is not allowed. Not only will this movie inspire you to take dance lessons, you’ll also be singing the songs on the soundtrack for the rest of your life.

No matter what you think about Julia Stiles’s dancing, there’s no denying that this gem is a classic of the genre. Julia plays Sara, who fails her Juilliard ballet audition then moves to Chicago and learns hip-hop dancing. The best part of all this, though, is that her first new friend is Chenille, a teen mother played by Kerry Washington, pre-Olivia Pope.

Before there was Grease, there was Saturday Night Fever. Let’s face it, Danny Zuko is pretty similar to Tony Manero, John Travolta’s character in SNF. I mean, that iconic white suit Tony wears on the poster? It’s basically Danny’s outfit in the “Hand Jive” scene in Grease. Saturday Night Fever will go down in history as one of the greatest dance movies ever, and the music might make you fall in love with disco. Seriously.

Australian good girl Sandy and greaser Danny fell in love over the summer. But when they unexpectedly discover they’re now in the same high school, will they be able to rekindle their romance despite their eccentric friends?

Yes, this is technically a dance movie, because remember: The Kings of Tampa aren’t strippers, they’re male entertainers. And male entertaining means dancing to “Pony” or, in the case of the whole group, “It’s Raining Men.” Hallelujah.

Buttoned-up lawyer John Clark, played by Richard Gere, begins taking dance lessons from Paulina, played by Jennifer Lopez. What ensues is a magical foray into the world of ballroom dance. Not only is it one of the best dance movies ever, it’s also one of JLo’s best films, too. I bet after watching it you will sign up for ballroom dance lessons.

Young Cuban Rafael just buried his mother, and comes to Houston to meet his father John for the first time. The difficult part is that John doesn’t know he is Rafael’s father. John runs a dance studio, and everyone prepares for the World Open Dance championship in Las Vegas. It soon becomes clear Rafael is a very good dancer, and Ruby is the biggest hope for the studio at the championship.

If the High School Musical movies left you wanting more Zac Efron and his sweet, sweet dance moves, this 2007 remake of John Waters’ Hairspray and the popular Broadway musical of the same name should satisfy all your needs. And maybe make you love John Travolta, who plays Edna Turnblad, even more, we could not forget to add this one to our best dance movies of all time list!

Cher + Christina Aguilera + all kinds of fun dancing = GOLD. The classic small-town-girl-heads-to-the-big-city story gets a campy, vampy update in this film. Starring Christina Aguilera, Cher, and Kristen Bell, it’s filled with drama, divas, and more Swarovski crystals than you can imagine.

Based on the musical of the same name, the film Chicago starred Catherine Zeta-Jones and Renée Zellweger as the iconic Velma Kelly and Roxie Hart. The movie musical incorporates classic Bob Fosse choreography which translated almost seamlessly from the stage to the big screen. Also, the dance that Velma and Roxie do together at the end of the movie is the perfect duet to try to learn with your bestie.

We’re throwing it back all the way to 1936 with this Fred Astaire dance film, which is nothing short of legendary.

SO much love for Gene Kelly, Debbie Reynolds, and Donald O’Connor!

Eleven-year-old New York City public school kids journey into the world of ballroom dancing and reveal pieces of themselves and their world along the way. Told from their candid, sometimes hilarious perspectives, these kids are transformed, from reluctant participants to determined competitors, from typical urban kids to “ladies and gentlemen,” on their way to try to compete in the final citywide.

Frank is a retired Lt Col in the US army. He’s blind and impossible to get along with. Charlie is at school and is looking forward to going to university; to help pay for a trip home for Christmas, he agrees to look after Frank over thanksgiving. Frank’s niece says this will be easy money, but she didn’t reckon on Frank spending his thanksgiving in New York. The Tango scene will make you unleash your dance moves!