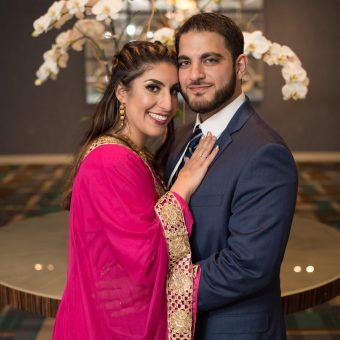 Tamara and Fouad tied the knot during their Wyndham Bonnet Creek Resort wedding in Orlando, Florida. Glamour and sparkle were definitely the defining features in their stunning Palestinian/Iraqi wedding.

Their story began back in 2015 when the two met up for a first date at a popular vegetarian restaurant in suburb of Chicago. Conversation flowed so well and towards the end of the night, Tamara asked Fouad if he would like to join her at Riot Fest, a concert coming to town that weekend. With an extra ticket in hand, Fouad jumped at the chance to see Tamara again.

Meeting up at Douglas Park, the two rocked out to System of a Down, Snoop Dogg, Modest Mouse, and several other artists that were featured the concert. While an absolute blast, Fouad had not realized the park would be a muddy mess from mosh pits to pouring rain. Dressed to impress, his nice attire didn’t end the night well, but his night in general was amazing with this gorgeous girl.

From mosh pits to many more dates, the two became inseparable and realized that they had a clear connection. Tamara love how safe she felt with Fouad to be able to just be her self. His loyalty, silly jokes, and willingness to always go on an adventure. Fouad loves how Tamara’s outgoing personality complements his more reserved style to a perfect T. Strong-willed and the “life of the party” Fouad knew he had not only found the love of his life, but would be marrying his best friend.

About two years later after their first date in April of 2017, Fouad knew it was time to seal the deal and planned out his proposal. Taking Tamara out for a date in Lincoln Park, Fouad asked her to go the long way past the Ulysses S. Grant statue verses an overlook bridge, as he supposedly on not seen the statue before. Tamara didn’t mind the longer walk as they made their way to the honeycomb pavilion, but the real reason was because Fouad’s sisters were perched out the bridge ready to watch the proposal! As their path winded to the pavilion, Fouad took Tamara’s hand and dropped to one knee. Asking for her hand in marriage, Tamara said, “yes!” Celebrating with their closest family and friends, the two tied the knot shortly after in Chicago before planning out their wedding reception in Orlando.

Here is couple words from photographer who shared with us his experience of meeting stunning Tamara & Fouad:

Our day was filled with glamour and magic from the moment we arrived. Two nights before, I had captured my couple with their friends and family at a henna event celebrating their upcoming wedding reception. I could tell that from that night, their wedding day would be quite the definition of gorgeous! With Tamara wrapping up finishing touches of hair and makeup, we captured her details and after headed over to Fouad and his groomsmen for getting ready shots. Having attended the University of Michigan, Fouad had incorporated the love of his college from the letter “M” cufflinks to an epic stadium groom’s cake – seriously each sprinkle was perfectly placed next to one another to create the look of a crowd from far above.

After the guys suited up, we headed back to our bride for putting on her dress after adorable robe shots. The girls were excited to be glammed up from head to toe when it was time to get in their dresses. After Tamara stepped into her dress, was zipped up, and a few bridal portraits with her mom, we all headed out for our sweetheart’s first look.

Let me just say, I am very impressed with my team’s ability to hold off an insane amount of tourists from walking down one of the busiest walkways of the entire hotel. Lana was the security master! Keeping things more intimate with no tourists to distract along the lush greenery walkway was so perfect. Tamara radiated as she walked towards Fouad. Tapping him on the shoulder, he beamed the biggest smile and held her tight for the sweetest kiss and hug.

Newlywed portraits throughout the property from the ‘castle’ to a secret garden made for a beautiful backdrop before we headed back inside for formal portraits with their wedding party and family. Dandy Details Events & Design created a stunningly beautiful pink, purple, and gold room that was filled with sparkle and glitter. Formal portraits took place in front of the sweetheart table that was surrounded by a arch of flowers hanging down.

Even more surprises came when Tamara and Fouad entered to a very grand entrance of drummers and featured belly dancer Carrara Nour. Guests LOVED the vibe and excitement, which immediately brought them all up on the dance floor to party with our couple. I must say as much as I loved their entrance, another surprise was in store -but on that later! 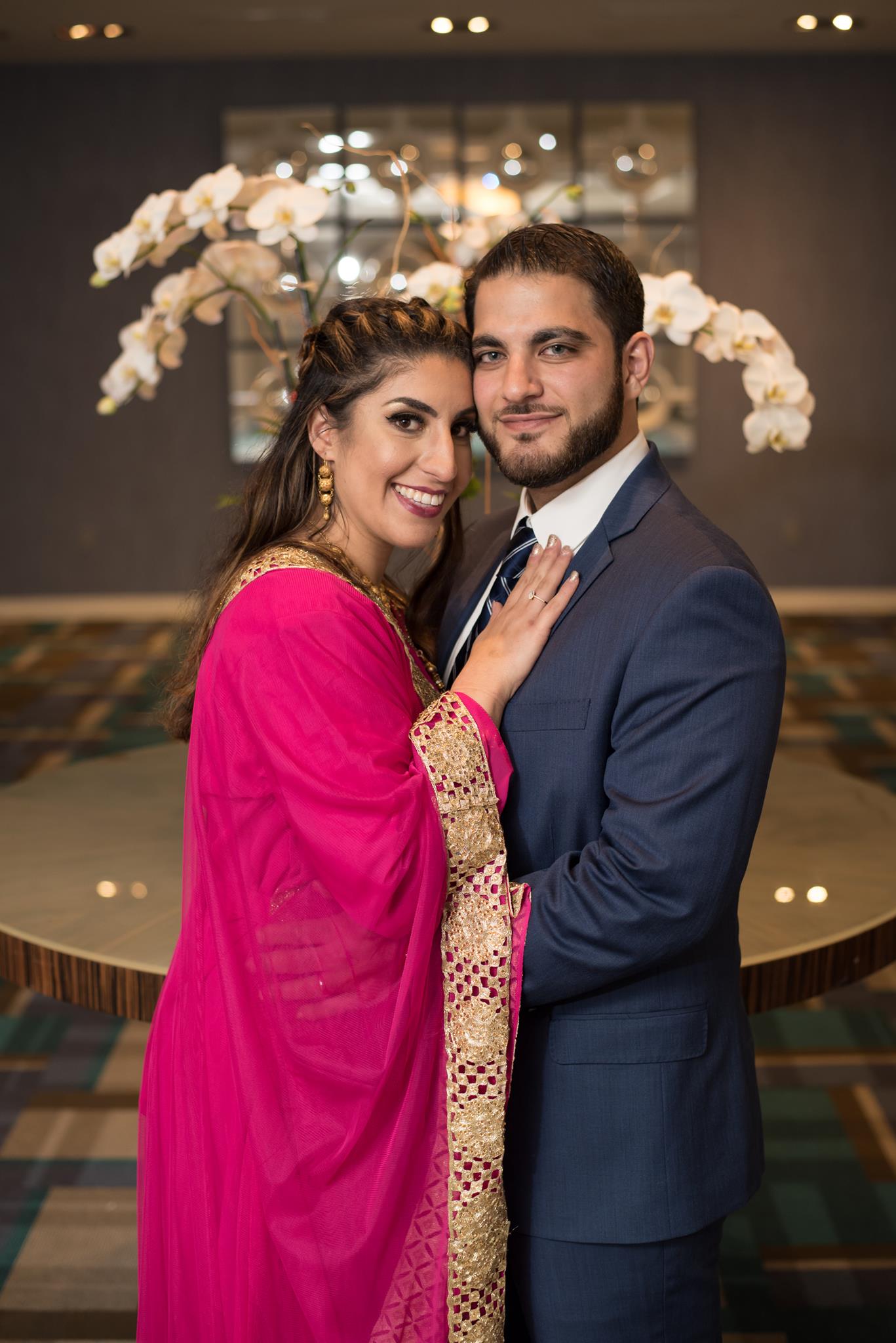 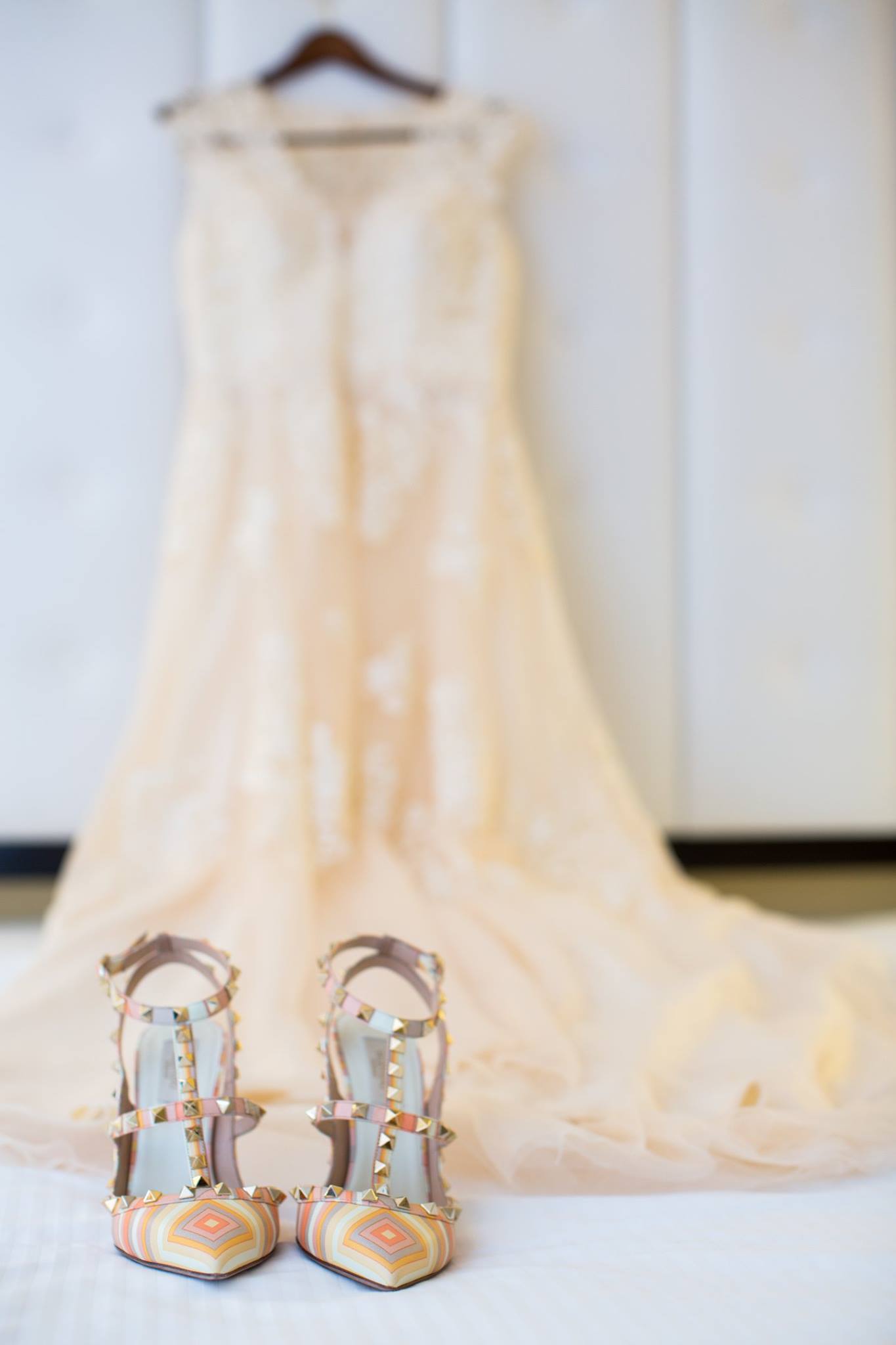 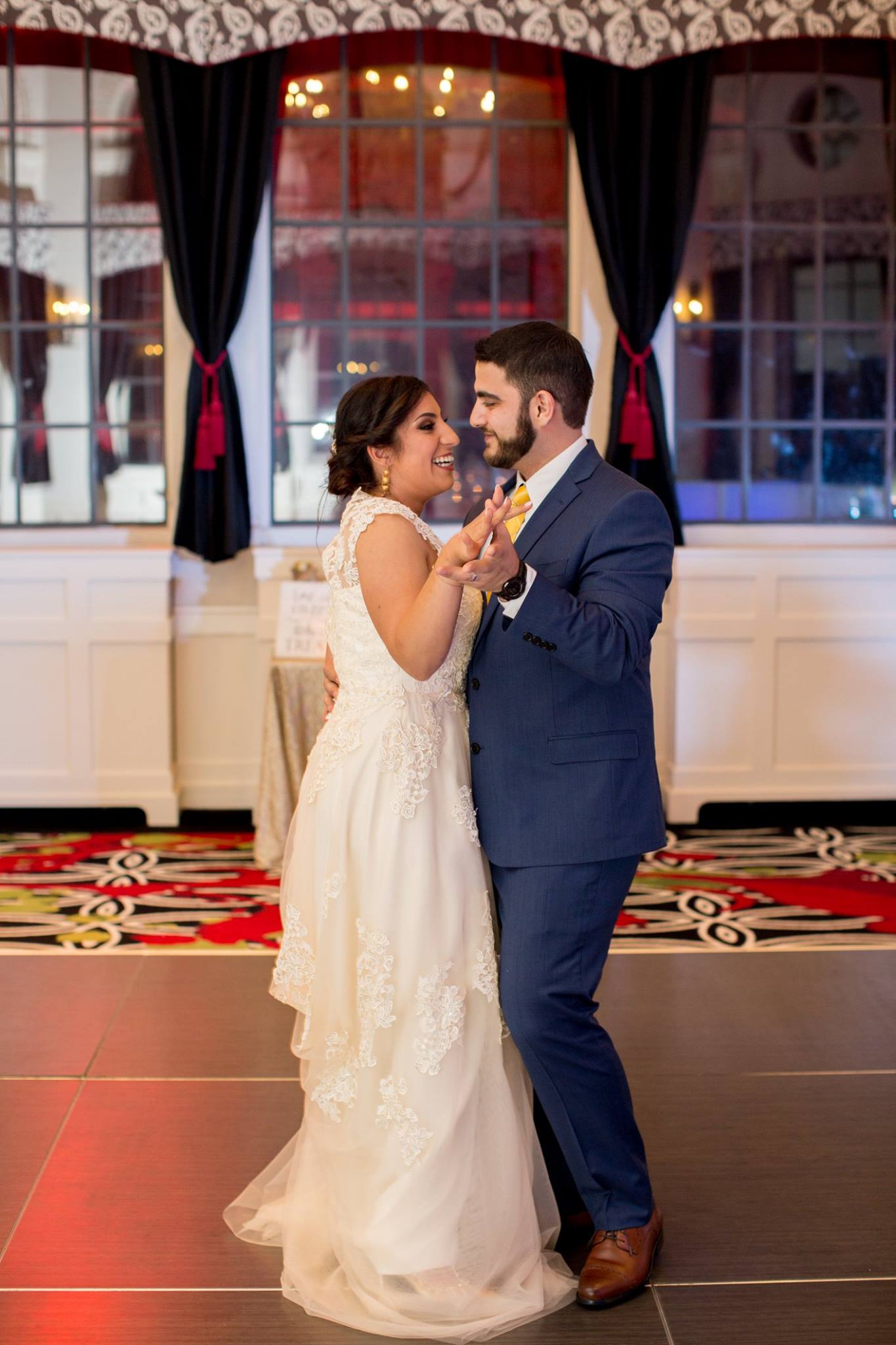 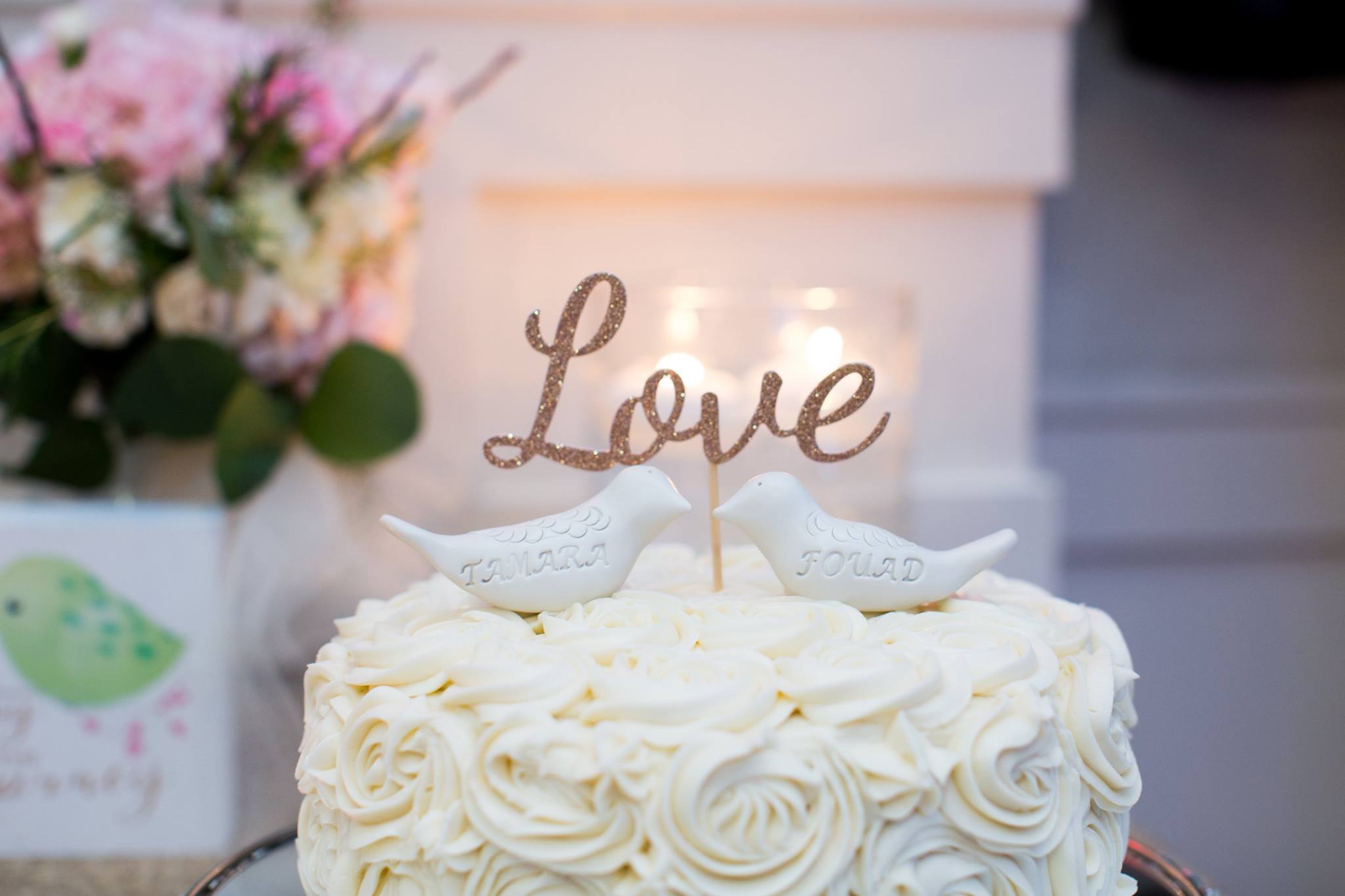 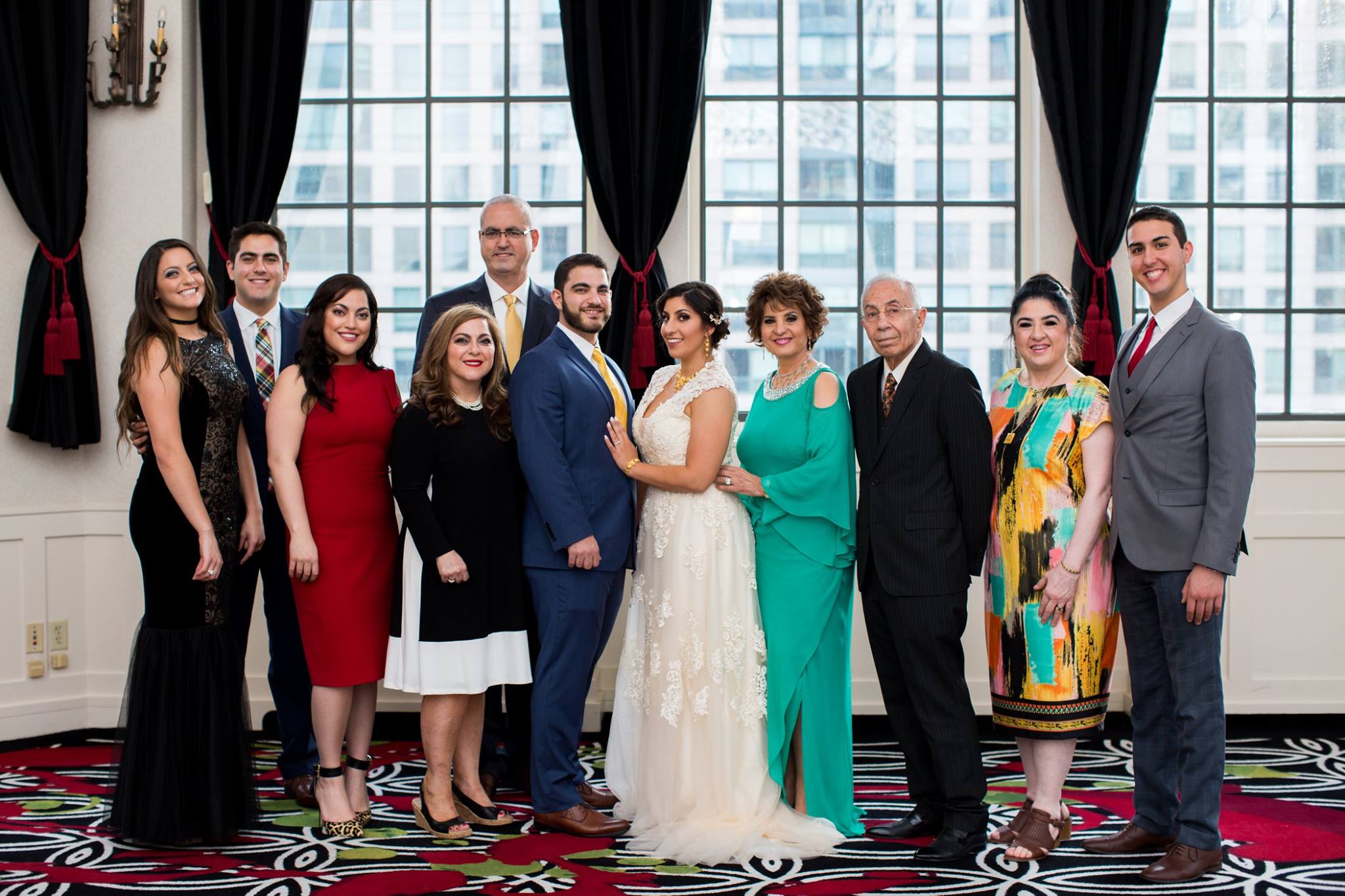 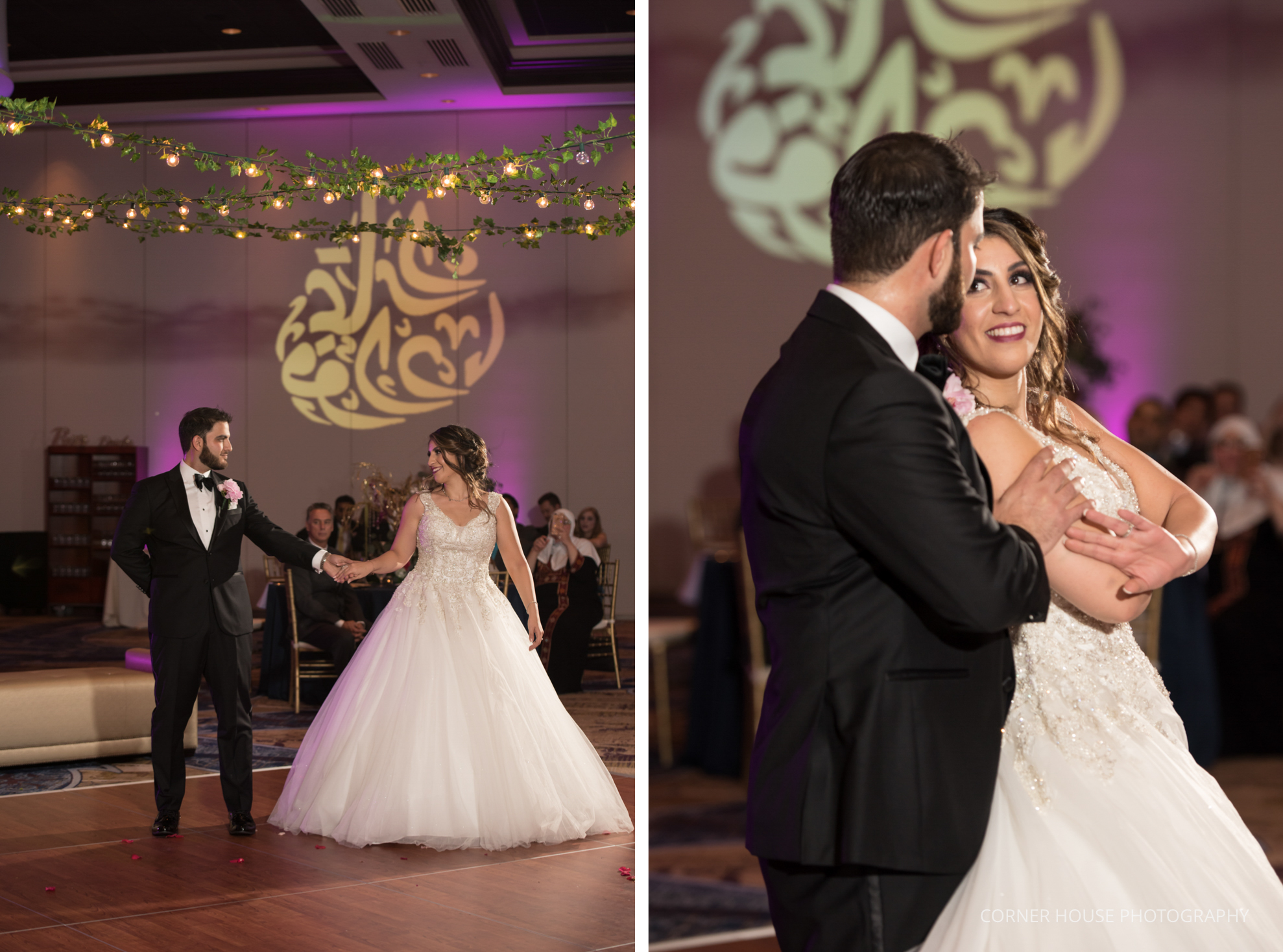 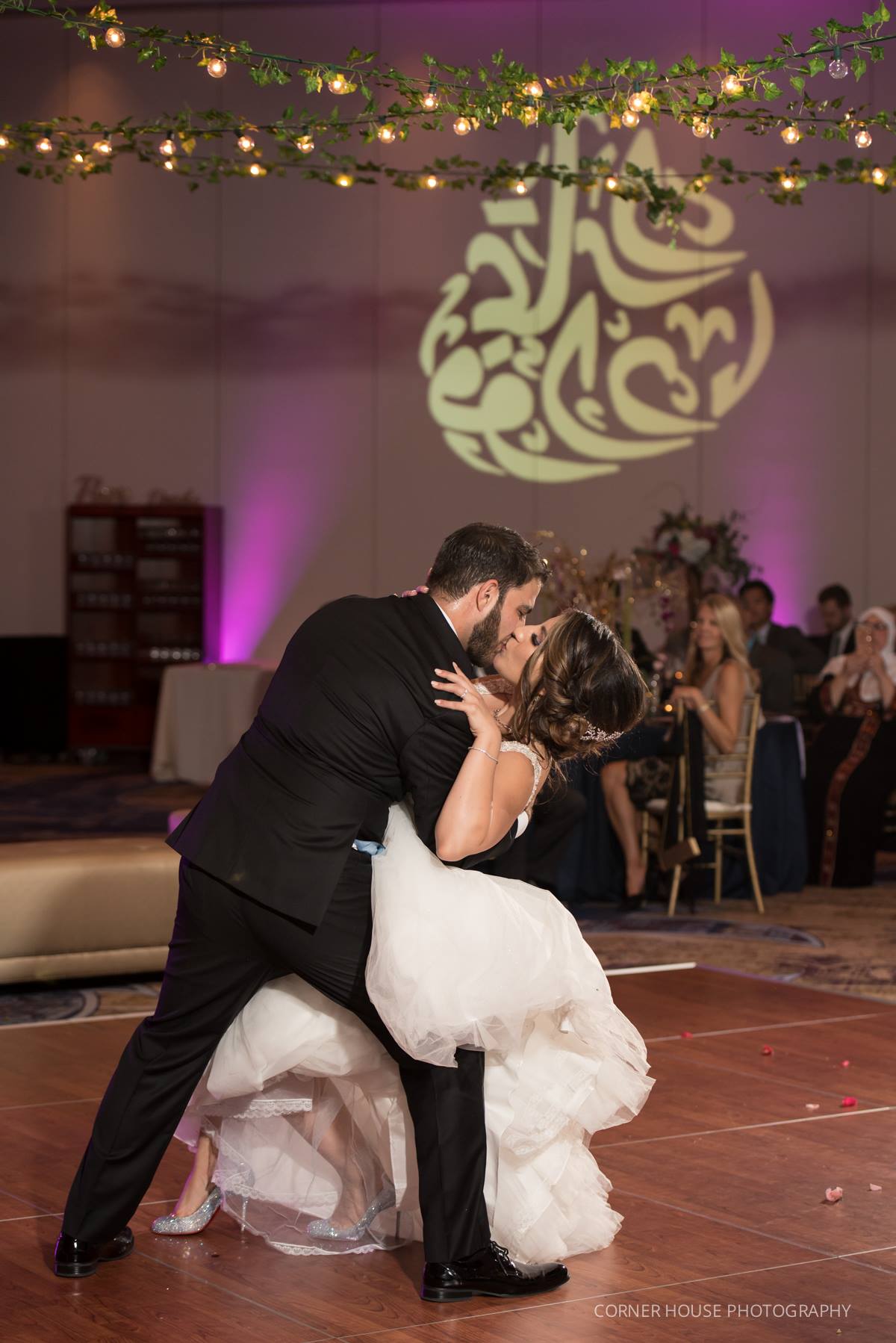 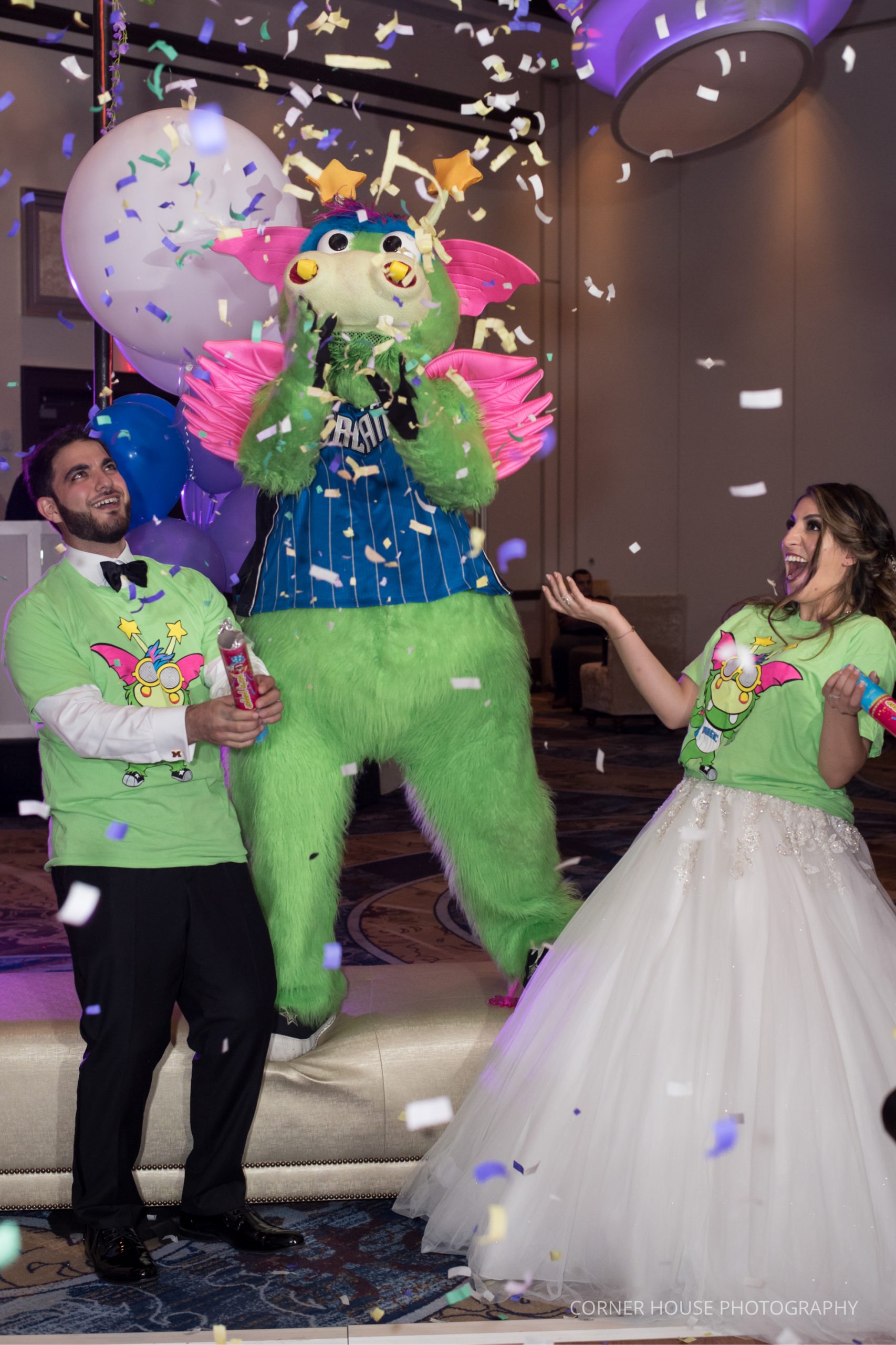 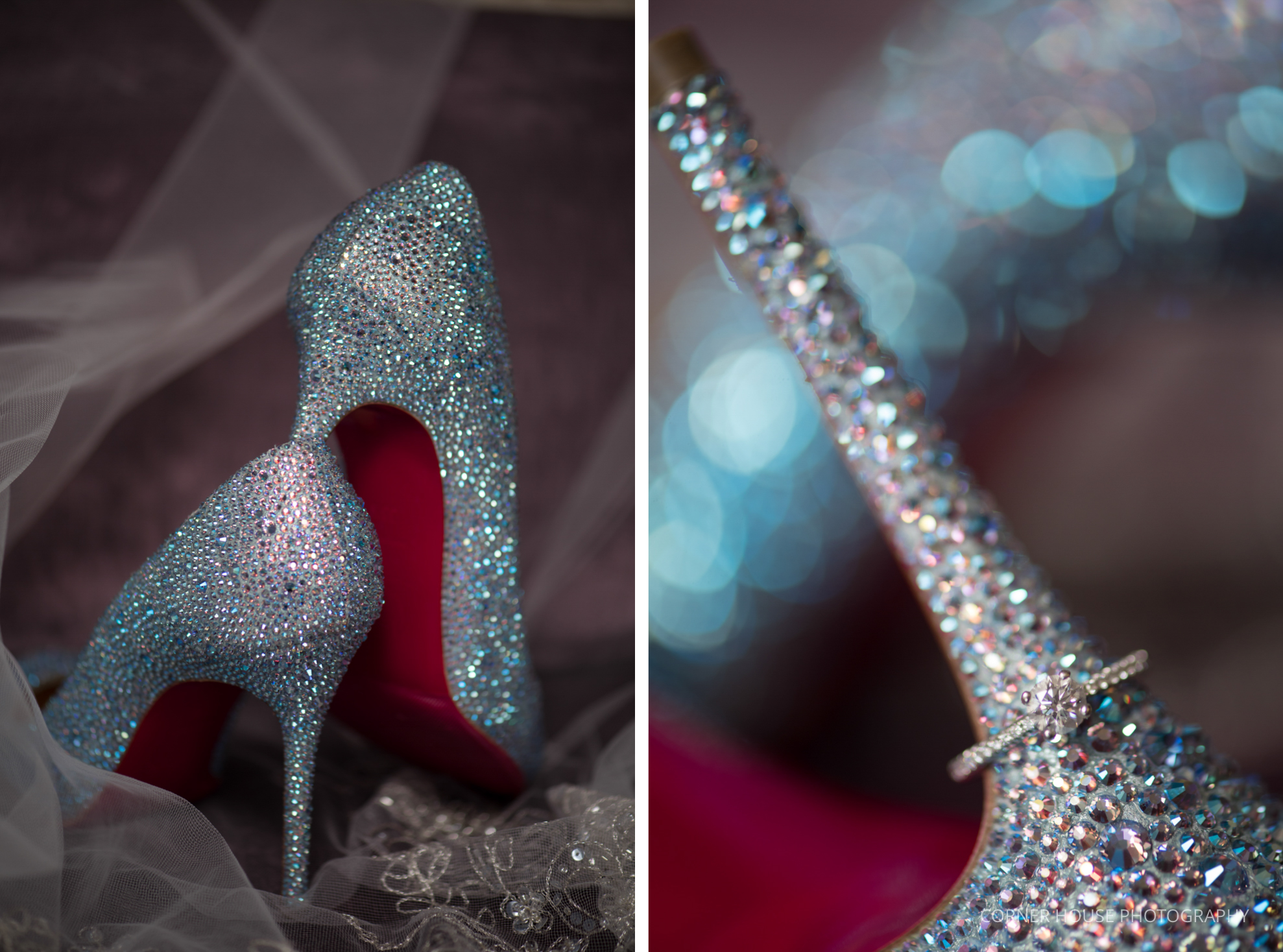 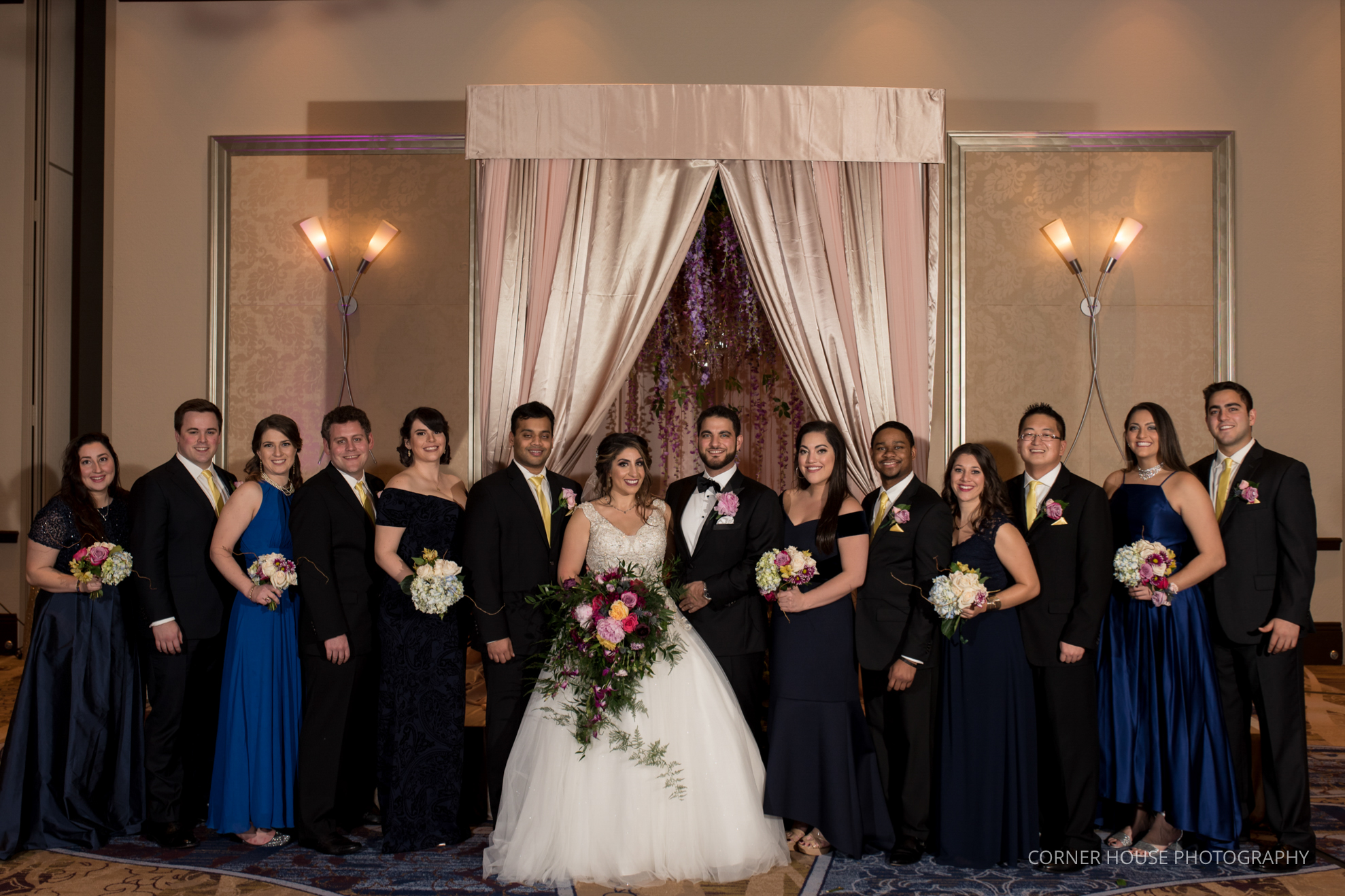 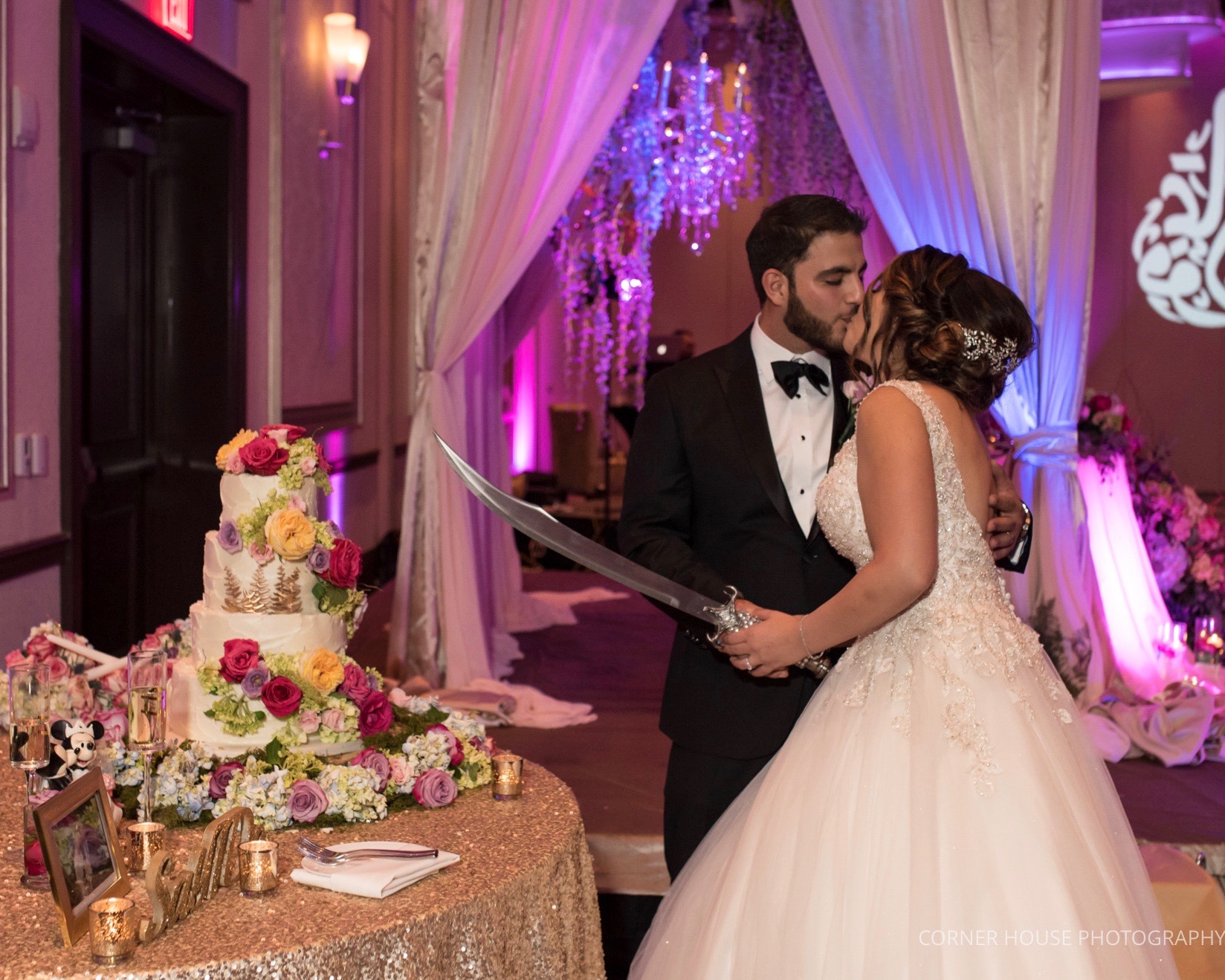 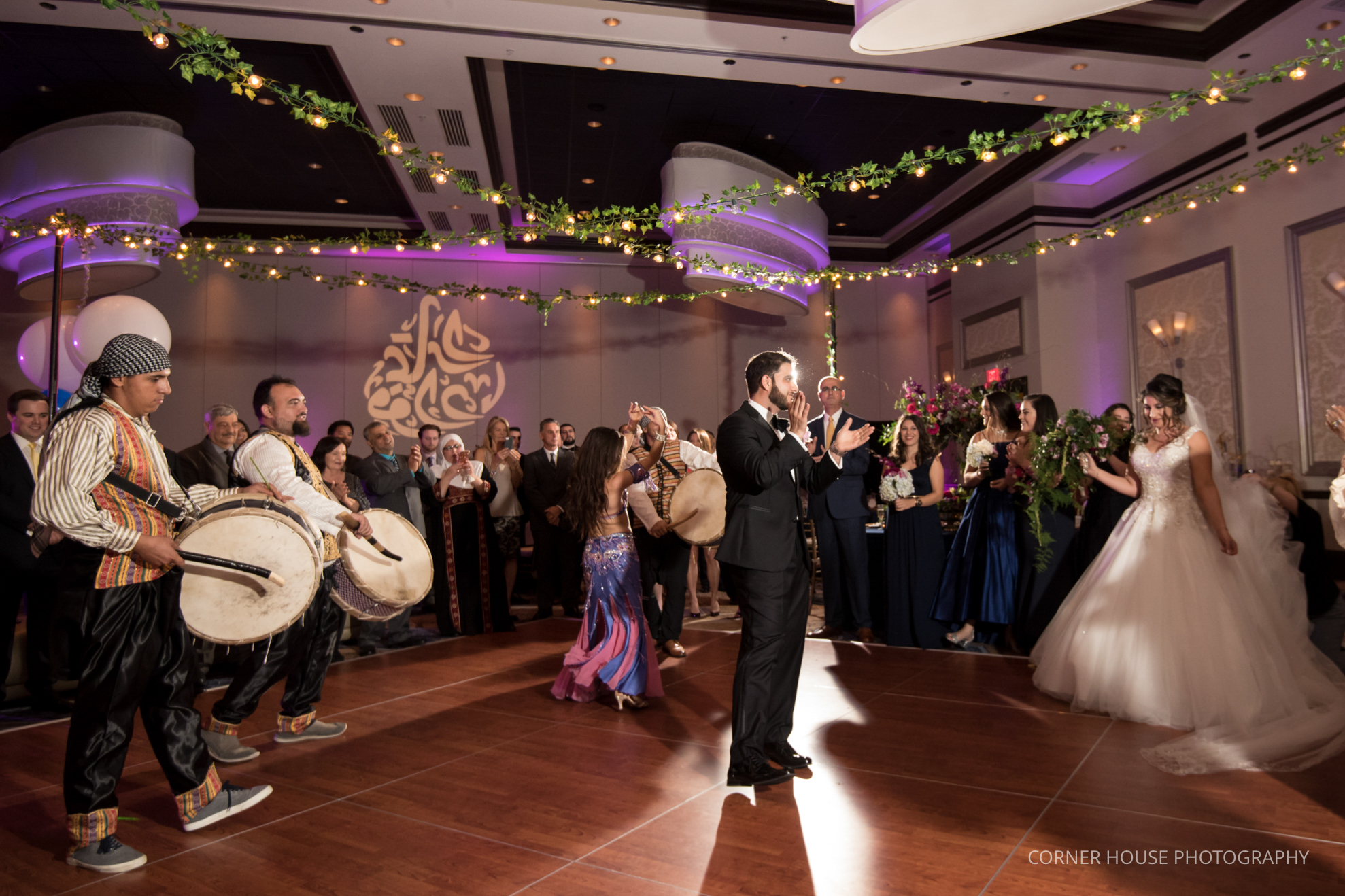 After their grand entrance, the next even that followed was their first dance. Beautifully coordinated, it felt natural and clearly these two knew how to ballroom dance. Of course, they took first dance lessons!  Anna at Lake Shore Dance Academy was their teacher, they learned social dances including romantic rumba which they used for their first dance.  They said  taking dance lessons was one of the most fun experiences during planning their big day.

Leaning her back for a kiss ended the dance before dinner and another ceremonial dance of a candle lighting. Their cake cutting was done by sword, which of course had rhinestones on the handle! Back to the grand surprise of the evening, and one of our most favorite events, Stuff! Stuff from the Orlando Magic made quite the bang with confetti poppers as he entered the room. Immediately going in for the biggest hug with our bride and groom, guests were in complete shock and excitement of seeing the Orlando Magic mascot.