Cha Cha latin and fun social dance, and all what you should know about it. 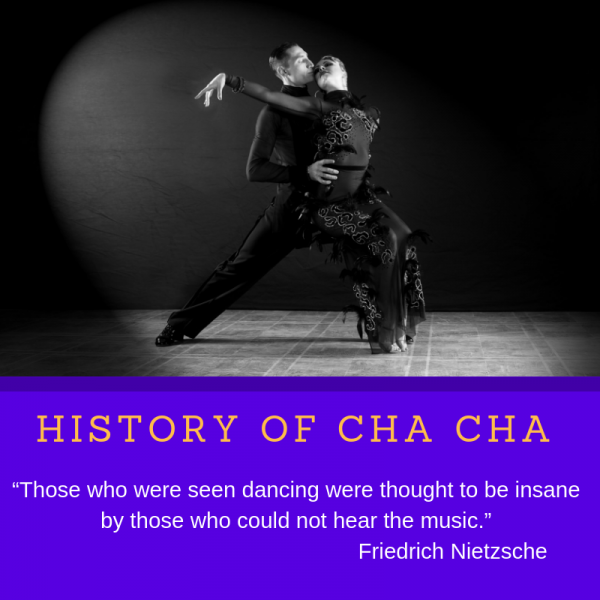 One, two, three cha-cha-cha! Do you know that the Cha-Cha social dance is a useful way of staying healthy and cheering you up? The Cha-Cha social dance is a lively, fun, playful and flirtatious dance known for it’s vibrant energy. The dance really gets you moving on the dance floor. Although it is traditionally danced to up-beat music with a Latin or Cuban beat, today it is common to dance the Cha Cha to many current styles of music including Top 40, Pop, and R&B. The Cha-Cha has become a must learn for beginning dance students. Let’s take a closer look at this fantastic social dance called cha cha!

HISTORY OF THE  CHA- CHA

Enrique Jorrin, a Cuban violinist, is attributed with creating the first Cha-Cha song. Havana, Cuba was a very culturally significant place in the 1940s and 1950s. It was extremely popular for the rich and famous to go and spend time in Havana resorts. Many influential writers such as Ernest Hemingway and Tennessee Williams had experiences in Cuba. These experiences shaped their monumental novels. Also, the famous Broadway “Guys and Dolls” was set in Havana, Cuba. Very famous American dance bands and the best Latin orchestras native to Cuba played in the Havana casinos. Mambo was born in this music and entertainment hotspot and the Cha-Cha social dance was derived from it.

The Cha-Cha, as a social dance, was introduced to the United States in the early 1950s and promptly sparked a dance craze. After arriving in the U.S.,

the traditional violins and flutes were often exchanged for big-band instruments such as trumpet, trombone and saxophone. This made the Cha-Cha more lively and full of vigor which sparked Americans to take lessons and learn to dance the Cha-Cha.

Quite similar to the Rumba and Mambo, Cha-Cha took the slower steps of both dances and added a triple step. The Cha Cha was originally one of the figures within the Mambo where three quicker steps followed two slower steps and weight was changed on each step. This Mambo pattern became the basic step for the Cha Cha.

In 1954 Cha-Cha burst into America and instantly took the place of Mambo. Like Mambo dancers, Cha Cha dancers keep their feet close to the floor, move their hips a lot while keeping their upper bodies erect.

Today, the Cha Cha is recognized in both American and International styles of ballroom dance. To learn more about differences of American and International styles ballroom dance click HERE. In traditional American rhythm style of the Cha Cha, the hips move through the alternating bending and straightening of the knees. In the International Latin style of the Cha Cha, the leg that holds the weight of the dancer is almost always straight. The free leg will bend to allow a naturally settling of the weighted leg. Both techniques are respected, recognized, and take dedication to master.

The Cha-Cha is found in ballroom studios across the nation and internationally. It’s lively nature and upbeat music make it a popular choice for dancers across the globe. It remains one of the most popular dances in the partner dance world. More recently, the Cha-Cha has become popular on National television competition show such as “So You Think You Can Dance” and “Dancing with the Stars.”

1. Due to the speed of Cha Cha, Cuban Motion is less pronounced than in  Rumba, especially on counts 4&, as these steps represent only half a beat.

3. Body movement should interpret the staccato feeling of the music.

4. Maintain same height throughout the dance, keeping the spine long,

the head up and shoulders down. Do not allow the shoulders to tilt from

5. Use correct Cuban Motion, stepping with a flexed knee and delaying

the straightening of the leg. Keep chest lifted and move the ribcage in

opposition to the hips.

7.  Lead and follow from the center of the body, using compression and